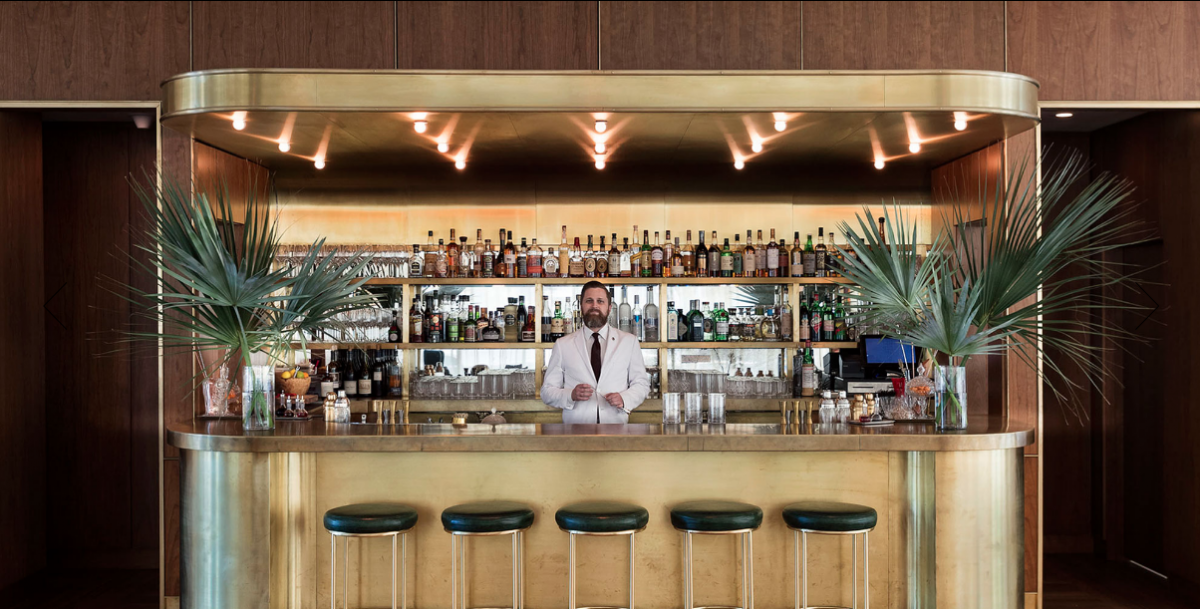 Little did I know, but I have long loved the work of the design firm, Workstead. Now I just happen to know who they really are. You see, many moons ago I found a bakery in the arcade of a building near my apartment in NYC. It is called Arcade Bakery, and it is one of my favorite haunts in the city mostly because the baked goods are to die for, but also because it is in the arcade of a lovely old Tribeca building. It has the most incredible simple yet incredibly stylish interiors I have ever seen. Despite my being the interior design geek that I am, I never knew who designed the interiors! Perhaps I was distracted by the pastries and coffee? Fast forward a few years and I find myself checking in to The Dewberry Hotel in Charleston. It is so lovely and I immediately inquire about who designed the hotel. Workstead! SO I look them up and lo an behold, I happen to already love their work. It all comes together for me and now I want to tell you a little more about them.

A GOLDEN BAR AT THE DEWBERRY HOTEL

“OUR WORK IS BOTH FUNCTIONAL AND ICONIC”

Turns out that Workstead is a New York based design studio focused on buildings and interiors with a featured line of products as well. Their most known projects are the Wythe Hotel in Brooklyn, the Rivertown Lodge in Hudson, The Dewberry in Charleston, and numerous public and private residential projects and their products can often be spotted in hotels and restaurants around the world. Their goal is to make a place have a sense of wholeness, often approaching design with a holistic eye. The world is full of chaos and they look to reinforce a sense of place through their spaces and design. I think they managed to do just that. Perhaps that is why I love the Arcade Bakery so much. They just nailed that kind of feeling of a sense of place.

ROOM DETAILS AT THE DEWBERRY

A LIGHT AND AIRY CAFE AT THE DEWBERRY HOTEL IN CHARLESTON

The Dewberry hotel serves as the design studios first major project in the Southeast, and their third major hotel. The hotel is housed in a former Federal office building and located in downtown Charleston, SC. It boasts 155 rooms as well as a restaurant, bars, spas, ballroom, and a picturesque lobby. The 5-star hotel exemplifies the concept of Southern Modernism “ a combination of the tried and true materials of the South, within the sensibility of the modern building that is The Dewberry”. They relied on local craftsmen to build The Dewberry and create a hotel that feels modern with a sense of Charleston.

SLEEK WOODEN TABLES IN AN ALCOVE PULL DOWN TO CREATE SEATING AT THE ARCADE BAKERY IN NYCI am obsessed!

“OUR WORK CELEBRATES OUR INTEREST IN UTILITY, FORM, AND MATERIAL STRENGTH”
THE ARCADE BAKERY

The Wythe Hotel originates in a 19th century industrial building, and in 2011 Workstead worked to create the interiors of the classic spaces like the lobby, Ides Bar, and the outdoor terraces. “The design of highly tailored millwork interventions in each public space frames a dialogue between the building’s industrial heritage and its modern use.”

WORKSTEAD ARE ALSO THE TEAM BEHIND THE BEAUTIFUL WYTHE HOTEL

Last but not least. The forever classic Arcade Bakery is a downtown in the know New Yorker’s favorite pitstop. If you follow me, you know I love this place. In the lobby of the historic Merchant’s Square Building, the bakery exists by bring built into the integral structure of the building. A series of alcoves each serve a purpose for this modern bakery. One alcove features wooden fold-down tables to accommodate seating areas for guests. The  acclaimed owner / baker Roger Gural worked with Workstead to bring this modern day bakery to life and I am so thankful they did. Now I just also happened to know that they did! Wanna join me for a coffee?