Interior Dialogue with The Albertine Bookstore 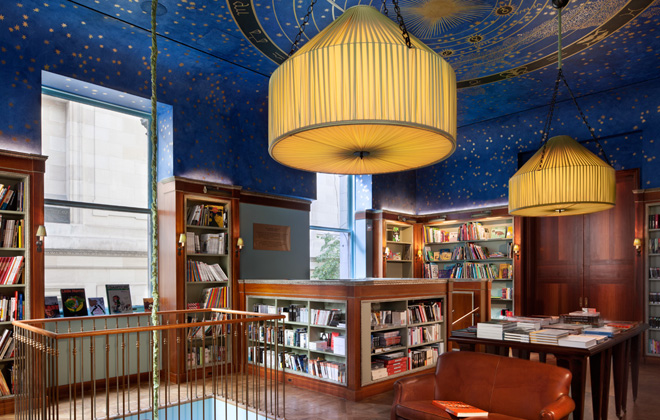 If you haven’t yet made a visit to the The Albertine Bookstore in NYC, you are in for a treat. This beautifully designed book shop opened in 2014 as an initiative on the part of the Cultural Services of the French Embassy, and is devoted to the exchange of French and English ideas. Nestled in the first floor of the iconic Whitney Payne Mansion on 5th Avenue, this cozy little shop is like stepping out of the hustle and bustle of New York, and into a Parisian cafe, calling you to pick up a book and stay a while.

Sticking to it’s French literary roots, the Albertine was named for the illusive character in Marcel Proust’s In Search of Lost Time. But it honors the French intellectual traditions in more ways than one, with rich programing of debates and readings that encourage open dialogue between French and English speakers.

The idea for the bookshop was the brainchild of Antonin Baudry, the current French cultural counselor, and author, who felt there was no place to gather, meet and exchange ideas in New York. He wanted to create a bookshop with French and English titles that would emulate the setting of the Parisian cafes, and provide space for discourse and sharing of ideas.

And what a better location for such a place then the landmarked 5th Avenue mansion. The building was originally commissioned in 1902 by Oliver Hazard Payne as a wedding gift for his nephew Whitney Payne and his wife Helen, who was a major patron of the arts. Designed by Stanford White, the famed architect who built the Washington Square Arch, in the Italian Renaissance style, the mansion was finished in 1908 and came to represent the height of classical New York style. The Cultural Services of the French Embassy then moved in 1952, and began restoration work through the 1980s.

When the bookshop opened in 2014, Baudry was committed to continuing the legacy of the building, along with incorporating French style. He commissioned the famed French designer Jaques Garcia to make the interior design evoke the feeling of traditional French library. The palette is warm and inviting, there are arm chairs, beautiful carpeting, and busts of great French thinkers on display, all of which were crafted in the atelier of the Musee de Louvre in Paris. There is also an impressive replica of Michelangelo’s “Young Archer” in the entrance way. This is because the original statue was in the entrance way, until 2009 when it was discovered to be a true Michelangelo! The piece was then loaned to the Met, and a replica was created to honor it. The main attraction is arguably the beautiful blue and gold leaf mural on the ceiling, which is a replica of the ceiling of the music room at the Villa Stuck in Munich, Germany, crafted by Franz von Stuck (1863-1928).

It would be well worth your while to make a trip to The Albertine to pop in for a look around, pick up a book from their well edited-selection, or have a look at their schedule of interesting events. Then grab a chari in a cozy corner and soak in the atmostphere. Trust me, you will be trés happy you did! Much more affordable than that airline ticket to Paris.