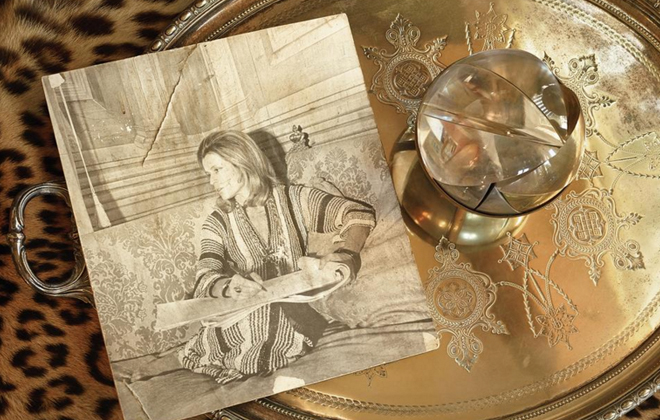 She has got to be one of the most inspiring, totally cool, and utterly other-worldly women on this planet. A while back when browsing an antique shop in the Hamptons, I spotted the most fabulous lamps. The were mid-century modern, with beautiful brass details, and I just had to find out more about them! The shopkeeper told me that they were designed by Gabriella Crespi, who was one of the few women to come out of Milan’s famous Politecnico school for architecture in the 1960s. Crespi went on to create her own amazing line of furniture and interior goods. Her designs are stunning , chic and clever all at the same time and they still look modern today.

Having studied architecture, she was greatly influenced by Le Corbusier and Frank Lloyd Wright, drawing on modernist architectural elements for her designs, and in the 1960s and 1970s went on to make waves with her own dynamic designs like the Z Desk, a large brass table with ‘z’ shaped legs that is perfect modernist chic, and her fabulous jewelry, and of course marvelous lighting fixtures. After finding out about this amazing legacy that she created in the 60s-70s, I had to find out what happened to Gabriella Crespi, and why had I never heard of her amazing designs? Here is what I uncovered.

Well, the budding designer quickly became the darling of the European elite, designing interiors for Royalty and high society, and getting more involved in fashion, developing creative relationships with designers like Dior, who incorporated her designs into his own jewelry and home collections, and Valentino, for whom she was of a muse of impeccable Italian style.

Where the story turns is that in the 1980s, she all but disappeared, not just from the design world, but from society at large, retreating to a self imposed exile in the Himalayan mountains. Crespi remained out of the public eye for more than 20 years, until the early 2000’s when she moved back to Italy and began designing again. Now at 94 years old, the fashion and design icon is back at it! In 2008 she was approached by Stella McCartney to create a limited re-edition of her iconic jewelry lines, and multiple exhibitions and catalogs have been produced about her incredible legacy and continuing passion for pushing design to its limits. I am in awe of both her devotion and timeless style. A true icon!