The Floral Creations of Azuma Makoto 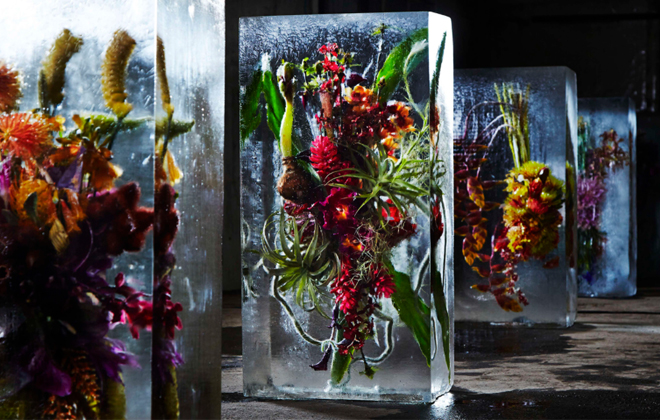 Ok, get ready for something that will blow your mind. What you see here is a fascinating project by artist-florist-set designer Azuma Makoto, who fuses art and science to create his beautiful works. Ready? This is an arrangement of exotic flowers in space! That’s right, SPACE. In his series “Exbiotanica” Makoto partnered with JP Aerospace to send plants and floral designs into the stratosphere with a ballon launched from the Black Rock Desert in Nevada. Suspended in carbon fiber cases, these terrestrial beings get to experience what it’s like to step off of earth’s surface and into space. How. Cool. Is. That? 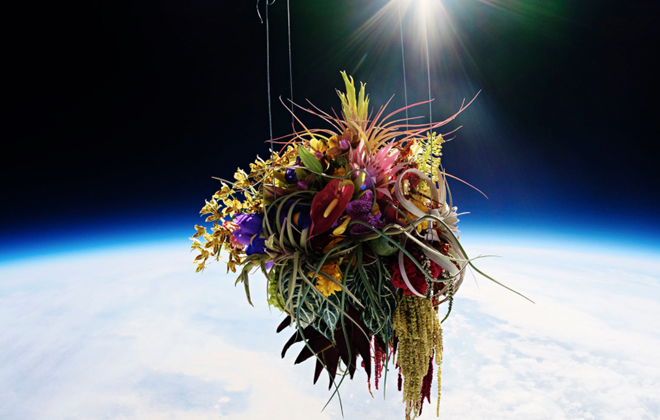 This project just goes to show how far and wide (literally out of this world) Makoto’s creations span. But what carries throughout is his use of many different types of plants and flowers to turn his arrangements into active sculptural elements that are truly transcendental.

Having gained a name for himself in the fashion world, Makoto has most recently teamed up with Dries Van Noten for the Spring 2017 show, where he created the most magnificent floral arrangements that were suspended and frozen in huge blocks of ice. The effect was breathtaking! The ice at once magnifies and brightens the exquisite flowers within, while also transforming them as the ice begins to melt. Just like with the works in space, Makoto is changing the way we look at these organic elements.

And these are just of a few of the amazing projects he’s done in the recent past! Other works of his combine natural fungi or tree growths dipped in gold or other precious metals to create a juxtaposition of two naturally occurring substances. He also has projects where he creates amazing and unexpected sculptures out of flowers, like his Flower Box, which it a perfect cube of blooms, or his Petal Box, which inverts the structure and creates a wall of jars full of plucked petals. And each thing is more jaw-dropping than the next!

On top of all that, Makoto also maintains a floral shop called Jardin de Fleurs in the trendy neighborhood of Aoyama in Tokyo. Here he offers his services for top of the line floral arrangements, but what I love is that he creates these “floral inspirations” for each month, where he puts together almost a collage of colors and blooms that he is working with at the moment.

Everything Makoto does is more extraordinary then the last, making him a true artist. Whether it be a stage setting for an experimental designer, a complex scientific endeavor, or a beautiful arrangement, he brings an unexpected beauty to everything he does, making you stop and think about plants and flowers in an entirely new way.

All photos courtesy of Azuma Makoto.