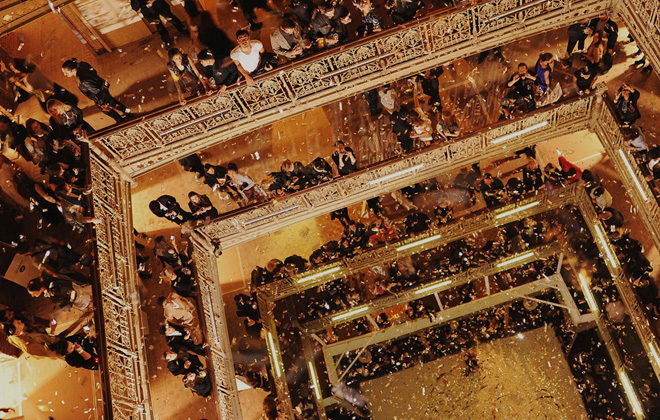 Downtown Manhattan is changing at a rapid pace which is making it one of the most exciting neighborhoods in NYC right now. One of the reasons I am most excited about this area is because of a newly restored hotel, The Beekman Hotel by the Thompson Hotel Group, which opened today near City Hall park. It is sure to enliven this historic neighborhood even further by bringing back one of its most prized gems, as well as adding a new take on Old New York with a residential tower. From what I have seen, it looks absolutely fantastic so far.

The building is stunningly beautiful inside and out, and was originally constructed in 1883 as Temple Court. It served as a business center in its heyday, housing law and accounting offices, as well as publishers and writers such as Edgar Allen Poe. Yes, that’s right folks, THE Edgar Allen Poe! It boasted a beautiful nine-story atrium at the center of the building, topped off with intricate glass and ironwork that at the time gave way to nothing but sky, since at around ten stories, the building was considered a skyscraper! It used to be one of the tallest buildings in NYC.

In the 1950s, with business changing and new building codes being implemented throughout the city, this grand building was chopped up into smaller, more practical office units, with the atrium boarded up for safety reasons.

Although this iconic building gained landmark status in 1998, it fell into disrepair, with tenants moving out to seek the sleeker new office space that that was sprouting up in high-rises all over the Financial District. It remained empty and abandoned throughout the 2000s. I cannot understand why, but it did! In fact, the building became some what of an attraction for the art and fashion scene, attracting the likes of Maison Margiela and Proenza Schouler, who held their runway shows in this colossal empty space.

But thankfully, nothing can stay nothing for long in New York! This space that attracted so many “urban archeologists,” interested in uncovering this preserved slice of Old New York was eventually bought up and the massive restoration started in 2013.

The restoration process was an incredibly intricate one, the architecture firm Gerner Kronick + Valcarel assisting in restoring or re-creating all the terra cotta tiling, ironwork, and custom millwork. The famed Atrium has also been opened up again! However now the view to the top is a bit different, with Tower One at the World Trade center prominently featured, along with many other Lower Manhattan icons, like the Woolworth Building. The hotel features beautiful rooms and suites designed by Martin Brudnizki, and restaurants by all-stars Tom Colicchio and Keith McNally. The mixed-use property will boast a brand-new residential tower built just behind the original building. Taking queues from the old design, the new tower and approach to preservation and innovation reflects the enrichment going on across Lower Manhattan, the area hit hardest after 9/11 and the subsequent market crashes. The new Beekman will be sure to bring people flocking to see this fabulous gem finally uncovered! I am certainly going to be one of them.

I will title this image “Tuning Out The Noise”

A moment of magic on our family road trip. I haven

Pretty in pink. Isn’t she? This church is simply

The chicest throws by @savedny are in my shop! Lik

Here’s to coffee and peonies and never letting a

A little peak at my back yard and the beloved rose

The Palestinian Table by @reem.kassis is brilliant

My beautiful Mom. Mommy. Mother. She has taught me

Crush Campaign #32- Morten Lasskogen If I could e

Welcome to Interior Monologue! Sign up now and receive 20% off your first purchase with us.

This website uses cookies to improve your experience while you navigate through the website. Out of these, the cookies that are categorized as necessary are stored on your browser as they are essential for the working of basic functionalities of the website. We also use third-party cookies that help us analyze and understand how you use this website. These cookies will be stored in your browser only with your consent. You also have the option to opt-out of these cookies. But opting out of some of these cookies may affect your browsing experience.
Necessary Always Enabled

Performance cookies are used to understand and analyze the key performance indexes of the website which helps in delivering a better user experience for the visitors.

Analytical cookies are used to understand how visitors interact with the website. These cookies help provide information on metrics the number of visitors, bounce rate, traffic source, etc.

Advertisement cookies are used to provide visitors with relevant ads and marketing campaigns. These cookies track visitors across websites and collect information to provide customized ads.

Other uncategorized cookies are those that are being analyzed and have not been classified into a category as yet.