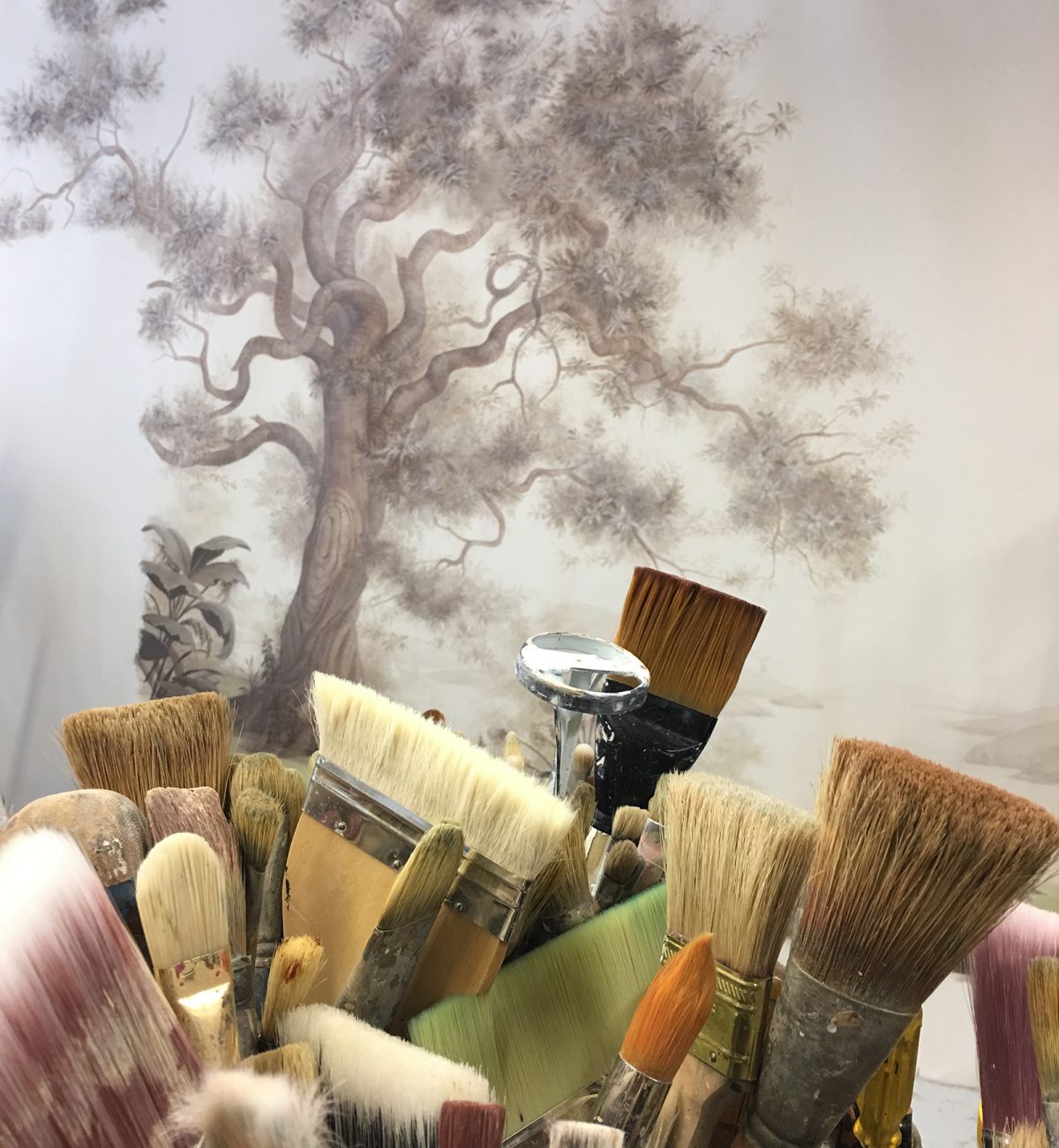 It is not possible for me to be more excited or more proud of this video. It is a major milestone for me and Interior Monologue because it was truly a life-changing experience that gave me so much focus on what means the most moving forward. That focus is to shine a major spotlight on amazing artisans like Anne Harris. She is a muralist whose talents are boundless. My dream when building Interior Monologue was to tell the stories about artisans like Anne in the most compelling way. Literally, I want everyone to know about these talents and to create a community that supports these kinds of artisans. This video is the first of what I hope will be many that do just that. So without further ado, here is the video!  And once you watch it, there is a little bit more of a background on this amazing woman who I not only consider a true visionary but a friend.

For Anne Harris, an entire room is a canvas. Her hand-painted murals are immersive worlds in the truest sense. As Anne would say, “I am so over a small frame. Give me a room!” The day I visited her sun-drenched studio in Long Island City, I was greeted by one of the greatest rooms I have ever seen! It was a whimsical forest of twisting trees and plants covered the entire length of her immense studio space and it simply took my breath away.

Anne has over thirty years of experience and has mastered a broad range of styles and subjects, from European to East Asian, Dutch still lifes to ornate maps. Her expertise and passion are clear when you see her work. I was amazed by Anne’s attention to detail and her dedication to rendering each leaf and stem. Each mural works as a whole and when viewed from close up, the detail in the work is even more incredible. It literally works on a macro and micro level.

Anne has been painting since she was eight years old and in college, she majored in studio art. But it wasn’t until age 28, on a trip to Italy, that Anne first became engulfed in a mural. Surrounded by Italian frescoes, Anne was inspired to bring a mural tradition back home to the US.

At first, Anne didn’t think she could make a living painting, the idea of doing art shows and then selling a few pieces a year didn’t sit well with her. Then her husband, a photographer, encouraged her to take a few months and give it a try. After just two months, Anne was off and running.

Anne’s current project will go into a large entry hall on Park Avenue for a private client. Each tree in the forest is imbued with a personality and character of its own. The process starts with a scaled-down maquette on which Anne plans the piece. Her pieces can take a long time to complete, but even during the course of my visit to the studio, I began to see the work progress.

With the help of her assistant, Kerry Thompson, Anne can finish a piece in a few months. Kerry is a large format painter himself and in his own studio paints, animal works with figurative elements woven in. In Anne’s studio, he works to match her style and follow her hand. It’s amazing to watch the two work together. They even have the same taste in music, and joke together that’s the most important thing. It is, isn’t it?

Given the number of materials and the time it takes to complete a piece of this scale, Anne could charge very high prices. But these days Anne is competing with large scale digital printing and less expensive patterned wallpaper. She keeps her prices lower than she perhaps out to given the work that goes into making a mural, but she does so to work as much as possible and remain competitive in this new “digital” world. I think Anne can change folks’ minds about murals singlehandedly because I believe if people see her work in person, there is no chance this woman won’t be painting murals for everyone who meets her! I sure know I will figure out a way somehow, one day, to have her mastery in my home as well. You can find Anne here! Please tell her we said hi when you do.