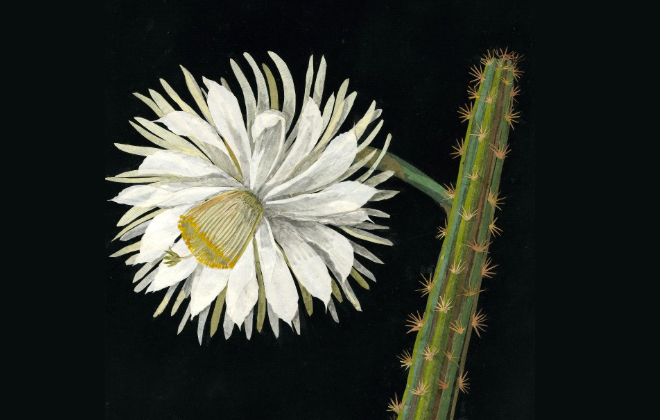 How does your garden grow? Well, in the case of an amazing woman named Mary Delany they grow on paper. I am fascinated by a recent discovery of this female artist from the 1700s and her stunning botanical paper mosaics.

After the death of her second husband, Mary, at the age of 72 (yes, 72!) and an already keen gardener and artist, began to create cut out paper artworks of flowers. All of her artworks were hand cut out of paper that she hand colored and pasted with incredible detail and accuracy. She used lighter and darker paper to form the shading in her art and placed one piece of paper upon another, bit by bit, where each picture might have had hundreds of pieces to form a single plant. Intricate to say the least!

She continued to make more than 1000 pieces of artwork until the age of 88 when her eyesight failed her.

Mary was said to have taken incredible care to make sure that each of her flowers were correct. There are theories that she first dissected the flowers in order to “build”them back up as her paper mosaics. She was a true pioneer in the 18th century of an art form that we still consider modern today. In fact, we often call it decoupage.

You can find the most examples of her work on display at the British Museum as well as in a book published by a descendant of Mary Delany’s sister Anne, Ruth Hayden, which was reissued in 2000 as Mrs. Delany: Her Life and Her Flowers.

Mary has certainly shown me that is never too late to find your life’s passion.