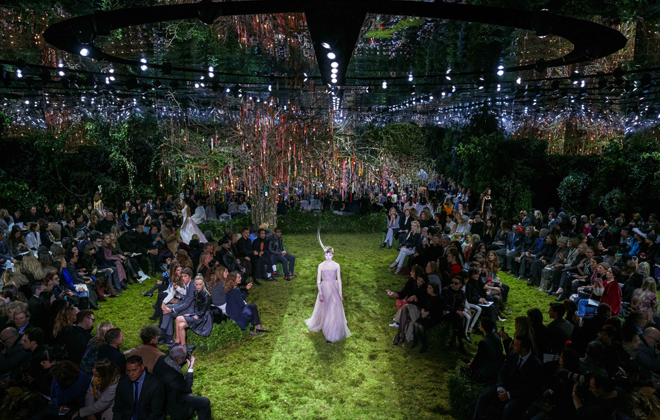 In other other-worldly news this week, Maria Grazia Chiuri put together her first couture collection for Dior in a stunning, labyrinth-inspired jewel box garden comprised of endless moss and flowers. It took three weeks to build the this stunning set, which was beautifully conceived and built by Bureau Betak. It makes me want to lie down on the soft moss and dream a little dream.

As for the collection, this was a monumental moment for House of Dior, with a women designer finally at the helm, and just in time for the couture shows in Paris. With such an amazing history of innovative designers, from Christian Dior himself, to Yves Saint Laurent, and more recently John Galliano and Raf Simmons, this is the first time the iconic house has had a woman in charge in it’s 69 year history. Something that Chiuri definitely noted in her Ready-to-Wear collection this fall, with her beaded T-shirt that read “We Should All Be Feminists.”

Keeping in mind this rich tradition of couture, which has been interpreted in many different ways throughout its leadership, Chiuri reflects on what she will bring to the legendary house: “I think it is important to maintain this idea that it’s wearable, because in any case we have the clients. But at the same time, I don’t want to lose the idea of dreaming.” she told WWD.

With her penchant for dreaming, along with Christian Dior’s love of gardens, Chiuri created a magnificent spectacle, where the opulent set design was almost as spectacular as the intricately embroidered and beaded gowns. The collection has been called “unapologetically feminine,” embracing pale colors, floral motifs, and sparkling beads, topped off with all things shimmering and gold. But what I love even more than her boldly asserting her feminine power over the house,  is that she has also brought the intricacy and craftmanship from her previous post at Valentino to the Dior runway.

You all might know that I have been a long time fan of hers following her rather obsessively to Dior from Valentino. I couldn’t wait to see that she came up with for her first couture collection for Dior and it didn’t disappoint. In fact, I found myself utterly impressed. It is going to be so exciting to watch this all unfold even further!