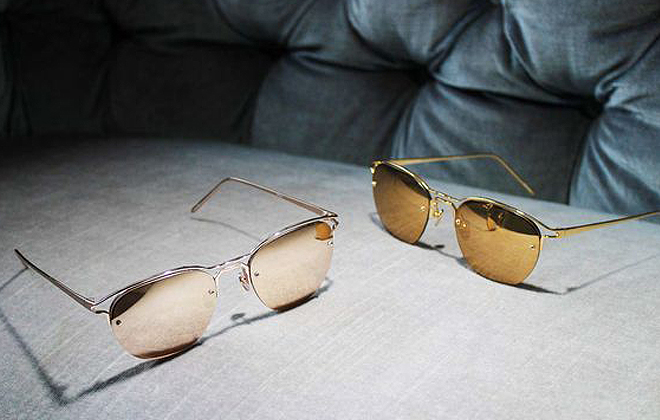 Say that 10x fast! It’s ffffffreaking hard to do. Ok, seriously, this post is about sunglasses. I happen to love sunglasses but have an incredible knack at losing them so I tend to not spend the serious cash on them anymore. I figure it’s better that way since they will likely only be worn a few times before they walk off! But I do love them, and there has always been a cool factor to sunglasses that goes above and beyond the function of shading your eyes from the rays. Or stopping those squinting lines from forming. Steve McQueen personified Hollywood masculinity in the Persole aviators, Bob Dylan made the Wayfarer a “downtown cool” staple, and who could forget Audrey Hepburn looking like the epitome of chic in those now iconic Oliver Goldsmith frames as she enjoyed Breakfast at Tiffany’s. But when it comes to sunglasses as a true fashion statement, look no further than the fabulous Linda Farrow, who in the 60s and 70s elevated the form from a mere accessory to a true expression of style.

Before the days of mass production and huge licensing deals, Farrow began designing and producing sunglasses for brands such as Dior, Balenciaga and Yves Saint Laurent, while also branching out into her own styles that ranged from outrageous, to utterly chic. And many of those shapes we still see today in the retro-inspired frames of many top designers. In short: she changed the sunglass game with her unique take on finely crafted, fashion-forward frames.

Although Farrow closed the doors to her successful line in the 80s to focus on her growing family, almost 20 years later her son Simon Jablon stumbled upon a loot of vintage frames in perfect condition in an old warehouse he was clearing out, and realized he just had to something with them. And thus in 2003, Linda Farrow Eyewear was resurrected, now under the direction of Simon and his now wife, Tracy Sedino.

In the beginning, partners Jablon and Sedino marketed the new iteration of Linda Farrow as a vintage company, selling the hundreds of frames in Linda’s collection from the height of 70s avant garden fashion.  At just 22 and 24 years old respectively, the couple successfully relaunched, selling the mint-condition vintage frames to Browns, as well as some of the top shops in London, that is until people began inquiring about future seasons.

This is when they decided to push the company forward and begin making new designs. It was important to maintain elements of the original shapes, craftsmanship, and spirit of the original line.  In this way, they began working with small upstart labels like Alexander Wang to produce frames much in the same way as Farrow did in the 70s; small scale but finely crafted production, always incorporating the designer’s style into her own keen eye for shape and color.

Now, the new Linda Farrow design team works closely with all their collaborators, who now include fashion giants like Dries Van Notes and Jeremy Scott, to create a line of frames that truly plays off of the current fashion landscape. 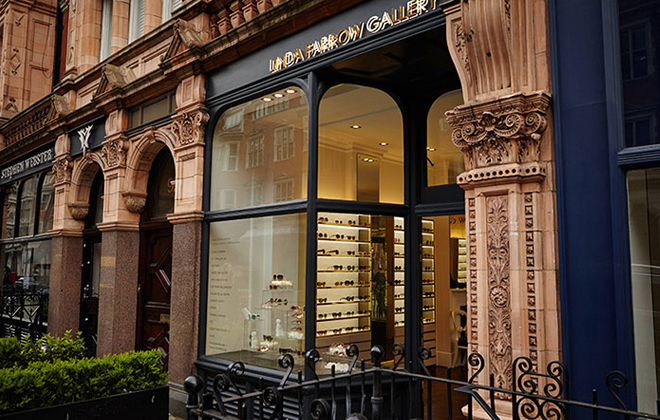 The Linda Farrow storefront in London looks fabulous, doesn’t it?Their own line has also taken off, with their first flagship opening in the hip Mayfair neighborhood of London in 2013, followed by shops around the globe, including New York and LA. But they have also stayed true to the original ethos of the brand, as they have continued to produce all of their frames by hand in factories in France and Japan. They have also set themselves apart as a family affair, with Linda, her husband and boys all working together to keep producing amazing, fashionable, and timeless frames.