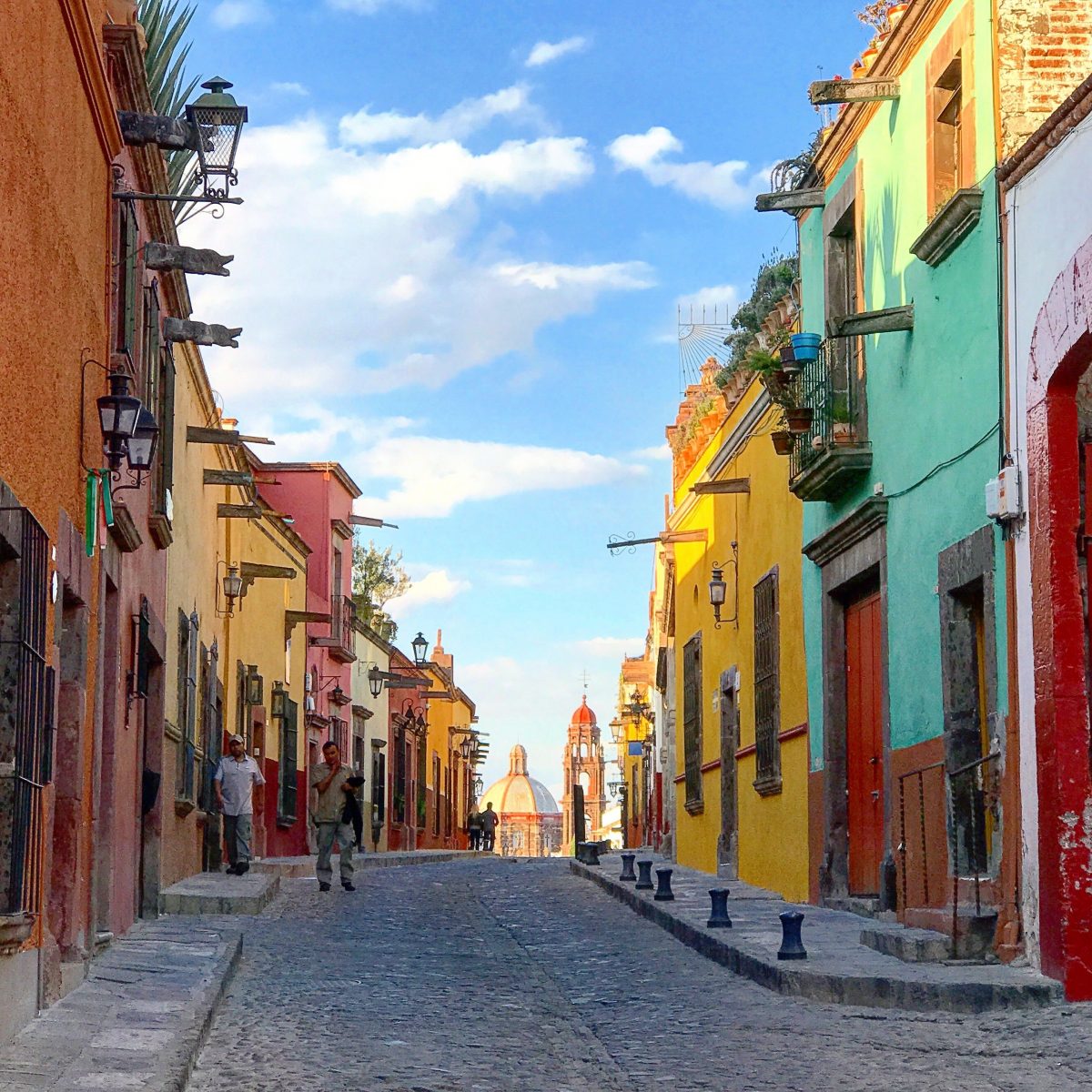 THE VIBRANT STREETS OF San Miguel.Photo courtesy of the English Room.

As we finally embark on Spring, and have yet to have the weather in NYC actually catch up to that fact, I find myself dreaming about visiting Mexico again. Since I don’t have the time to do so this year, I will take myself and all of you on a trip to San Miguel de Allende with two of their local interior design talents, Jeffry Weisman and Andrew Fisher. Jeffry and Andrew established their design firm Fisher Weisman in 2000 to focus on developing luxurious residential interiors as well as focus on designing. Fisher Weisman has collaborated with exclusive brands such as Boyd Lighting, The Wicker Works, and Michael Taylor Designs to release collections of lighting and furniture. They fell in love with San Miguel after a short trip suggested by their sister and ended up buying and renovating an 18th century home. In San Miguel de Allende they launched the Fisher Weisman Collection in 2016. This collection, offered in showrooms around the US and in Sollano 16 in San Miguel, it’s a unique line that focuses on attention to detail and is inspired by the craftsmanship in Mexico.

“Andrew and I discovered early in our relationship that we both love Mexico. Originally we thought we would go to the beach, but decided we were better suited to city life. While in the early phase of exploring possibilities, my sister Laura mentioned that she was traveling to San Miguel de Allende. We told her we were excited to hear what she thought about it and upon her return, she said there was “no doubt” in her mind that we would live there at some point. We questioned her: No doubt??? And she doubled down. Four weeks later, a real estate agent we knew called out of the blue to ask if we were interested in selling our weekend house in Sonoma. The deal fell right into place and we planned a vacation in San Miguel shortly after the close of escrow. The day we arrived we looked at each other and knew that Laura was spot on. We began looking at houses the next day.” – Jeffry Weisman

Chef Donnie Masterton’s beautiful establishment The Restaurant is the celebrating its 10th anniversary this year (actually this week), making it the granddaddy of fine dining in San Miguel. Thursday a full roster of burgers replaces the usual list of main courses and it’s quite hard to get a table. Lunch in the open-air courtyard is our favorite. Chef Mateo Salas directs two of the most sophisticated kitchens in San Miguel, Jacinto 1930 and the more elegant Aperi. We love both. Mateo’s deft approach to light, fresh, modern Mexican cuisine is unparalleled. Bovine is one of the newest places in town, bringing Chef Paul Bently from Guadalajara to an upscale, high-toned space with great service, great drinks, and delicious food. You’ll think you’re in Rome when you order an espresso at Ki’Bok Coffee. This centrally located, charming coffee bar also offers a breakfast and lunch menu. Warning: one shot and you’ll be hooked.

KINGSLEY MARKET INTERIORS ARE THE EPITOME OF MINIMALISM IN MEXICO.

Casablanca 7  is a just-opened boutique hotel that we designed in the heart of the center. Comprised of a 17th century with an 18th century addition, we guided the restoration of the original buildings and the addition of a second floor on both buildings. We created 10 unique suites around the courtyard of the 18th century section, while the main house accommodates a spacious bar, and a large dining room. In April, Donnie Masterton will open Fatima, a rooftop restaurant with a Mediterranean-inspired menu above. L’Otel at Doce18 Concept House is a super chic new hotel just steps off the Jardín, the main plaza of San Miguel de Allende in what was a foundry. Built above a full level of retail shops and restaurants, the hotel has ten beautiful and spacious rooms and a dramatic rooftop swimming pool and sunning terrace. Dos Casas is a very stylish boutique hotel that also houses Aperi. Rosewood San Miguel is a short walk from the historic center and offers large suites with 5 star service, the best gym and spa in town, a fine dining restaurant and a rooftop bar with great tapas.

The 18th century house that is home to Sollano 16 and The Restaurant is also the San Miguel outpost for the Fisher Weisman Collection. We designed the boutique for Anne and Houston Harte, and have designed a range of custom lighting for the store and Restaurant. We love seeing how our collection of lighting, furniture and accessories is showcased in this classic house. WABI by Ted Wolter is a minimalist dream. Exquisitely edited, serene and beautiful, WABI offers furniture, housewares, Moroccan carpets and artwork. They don’t have a website so you will have to seek out this gem the old fashioned way. Casa Midy is the brainchild of Jorge Almada and Anne Marie Midy. Their iconic furniture, lighting and accessories are showcased in another charming 18th century house in the center. La Calaca has by far the best collection of vintage ceramics, textiles and objects in town. Evita Avery has an incredible eye and sources the best of the best from all over Mexico.