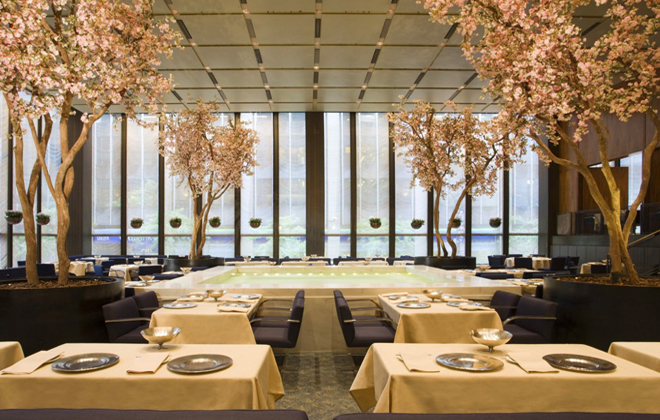 Darling, I love you, but give me Park Avenue! Nothing is nicer on a warm Spring night, then riding in a taxi up Park Avenue passing one of my favorite buildings, the Seagrams building. I’ve always been drawn to it with its dark glass facade that lights up with a warm glowing grid of bronze and darkened windows at night, and with the imminent closing of the Four Seasons Restaurant, I thought I’d take a closer look at this innovative and holistic approach to design. The iconic minimalist building really was the first of its kind. Designed by Mies van der Rohe and completed in 1958, the German architect brought the idea that “less is more” to mid-town Manhattan at a time when gargoyles and ornamented details were still all the rage.

Mies van der Rohe didn’t just stop at the beautifully designed black steel and bronze facade and structure of the 38-story building either. Along with renowned architect and designer Philip Johnson, the pair curated and designed every aspect of the building, from the massive entry way, to the outdoor public plaza, to the famous Four Season’s restaurant. Johnson envisioned the restaurant to usher in a new era in luxury, where every chair, glass, curtain or light fixture was designed to perfection.Even the bathroom designs were cutting edge. Many of these original designs are now a part of MoMA’s permanent design collection. I get goose pimples every time I go there.

Johnson and Mies van der Rohe also were some of the first architects to incorporate modern art into their design, creating spaces in the entry lobby, the plaza and throughout the restaurant to showcase great works by artists like Picasso, Calder, and Pollock. This was a tradition that the Four Season’s maintained throughout its 57 years in operation, showing works by Stella, Warhol, Koons and many other contemporaries over the years.

This is just one of the many charms of the Four Seasons, which will be sorely missed when the restaurant closes its doors this July. It truly will be an end of the era. I remember when I moved to New York in the late 90s, having a drink out at the Four Seasons was the height of New York cool. Entering the enchanting Pool Room in the Four Seasons, with it’s beautiful trees dripping with style, history and elegance – well, there’s just nothing else quite like it and I am afraid it will leave us with a gaping hole.

That said, the Major Food Group (of restaurants like Carbone and Parm), is due to move this summer, bringing with them a new take on the iconic classic. Although they say they will maintain some aspects of the interiors, there’s no doubt there will be some changes. And to be honest, there is quite a bit of doubt on my part that it can possibly be as good as it is right now. If it ain’t broke…

Well, I’ll try to keep an open mind for now, but I do have to say that I will miss that magical interior, and that feeling of impeccably designed luxury that the original space offered. I’ll just have to try and get there as much as I can before it’s only a memory.