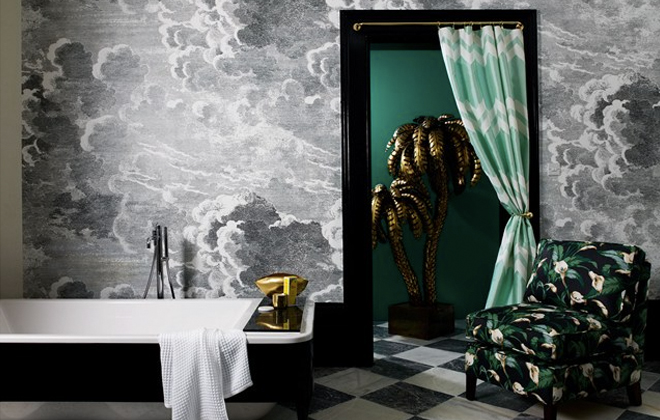 Hello 2015. Let’s hope that you are starting this year clear headed, well rested and hopefully, your head is not in the clouds. But, if it is, let’s hope your clouds look a little like these gorgeously etched clouds on this wallpaper. I happened upon this wallpaper at Liberty in London the other week and fell for it hard. A bit of research revealed that it is a design by Fornasetti that is printed by Cole & Son in London.

I have been a fan of Cole & Son for years. Cole & Son was founded in 1875 by John Perry. In those days the company was situated in Islington, north London, an area famous for the 190 hand block printing companies working there in the 18th and 19th centuries. Can you imagine a day when an area of a major city like London had areas famous for block printing? Sounds dreamy.

Cole & Son have a reputation built on years of history in the craft of  hand block printing wallpapers. Throughout the 19th century, Cole & Son printed for all the large well-known companies of the time including Jeffrey & Co and Sanderson. In 1941, Cole & Son merged the wallpaper designs of A W Pugin for the Palace of Westminster with their own collection and became the custodians of the most significant collection of wooden printing blocks in Britain.

Today, the Cole & Son archive consists of approximately 1,800 block print designs, 350 screen print designs and a huge quantity of original drawings and wallpapers, representing all the styles from the 18th, 19th and early 20th centuries. Amongst these are some of the most important historic wallpaper designs in the world.

In the case of this lovely Fornasetti cloud wallpaper, this a more recent addition to their collection. So thankful that companies like Cole & Son exist to keep the craft of hand block printing alive in this day and age. It is certainly not easy to come by.