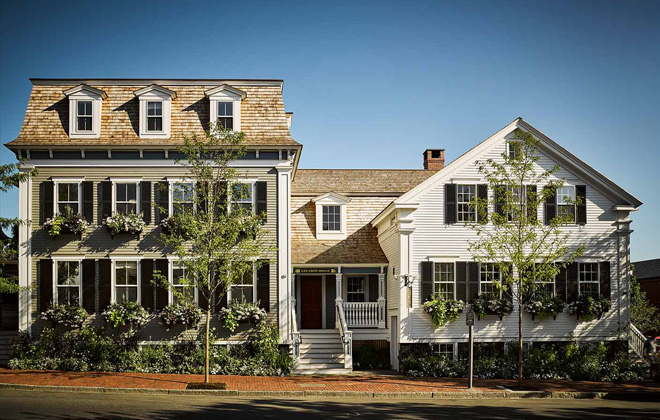 Roman & Williams have done it again! This time, my favorite design duo takes on Nantucket, which has gone from one of the oldest colonial settlements, to whaling capital, to one of the most sought after vacation destinations on the East Coast. But this tiny island off the coast of Massachusetts has also remained one of the most well preserved towns in terms of its architecture. This is why it came somewhat as a shock that a new 20 room guest house called Greydon House was opening in downtown historic Nantucket. In fact, the three-story addition that was built alongside the 1850’s Greek revival house (formerly a doctors office), was easier said than done.

But hoteliers and brothers Alexander and Jeremy Leventhal, along with partner Elliot Gould were determined to bring to life their take on classic Nantucket-chic. And with a strong sense of history, a strict review process, and the help of swanky design duo Roman & Williams, as well as local architects and historians  – all the shingles, building materials, and even paint colors are historically accurate. The result is a fabulous update to the existing 19th century house with a new, comfortably modern, yet stylishly classic addition. It is now the biggest new building built in the last 100 years.

The Leventhal brothers, who grew up in Boston, spending many summers out in Natucket and Martha’s Vineyard, were at first met with great opposition, as the locals viewed the project as very “New York” and wanted to avoid the type of expansion that has taken place in the Hamptons. But after after stringent reviews and proving that their vision was inline with the towns design ethics, the new designs passed and work began on the new hotel.

Not only does the hotel boast beautifully designed, comfortably plush guest rooms, they also have an excellent restaurant that is an elegant take on classic American and maritime fare, by former chef of Michelin-rated NYC restaurant Aureole, Marcus Gleadow-Ware. The Leventhals’ also happen to be the grandson’s of Elliot Gant of the epynomous clothing line, so all uniforms are stylishly Gant. They even have a signature scent created by Cinnamon Projects called No. 17 Greydon House, which has tones of “sunrise fog, ambergris, cedar, sunbaked canvas, fern, driftwood, iris root, coiled rope, violet, and midnight bonfire.” What didn’t they think of? So, as I love to say, who is joining me on a jaunt to Nantucket to visit this dream of a hotel?