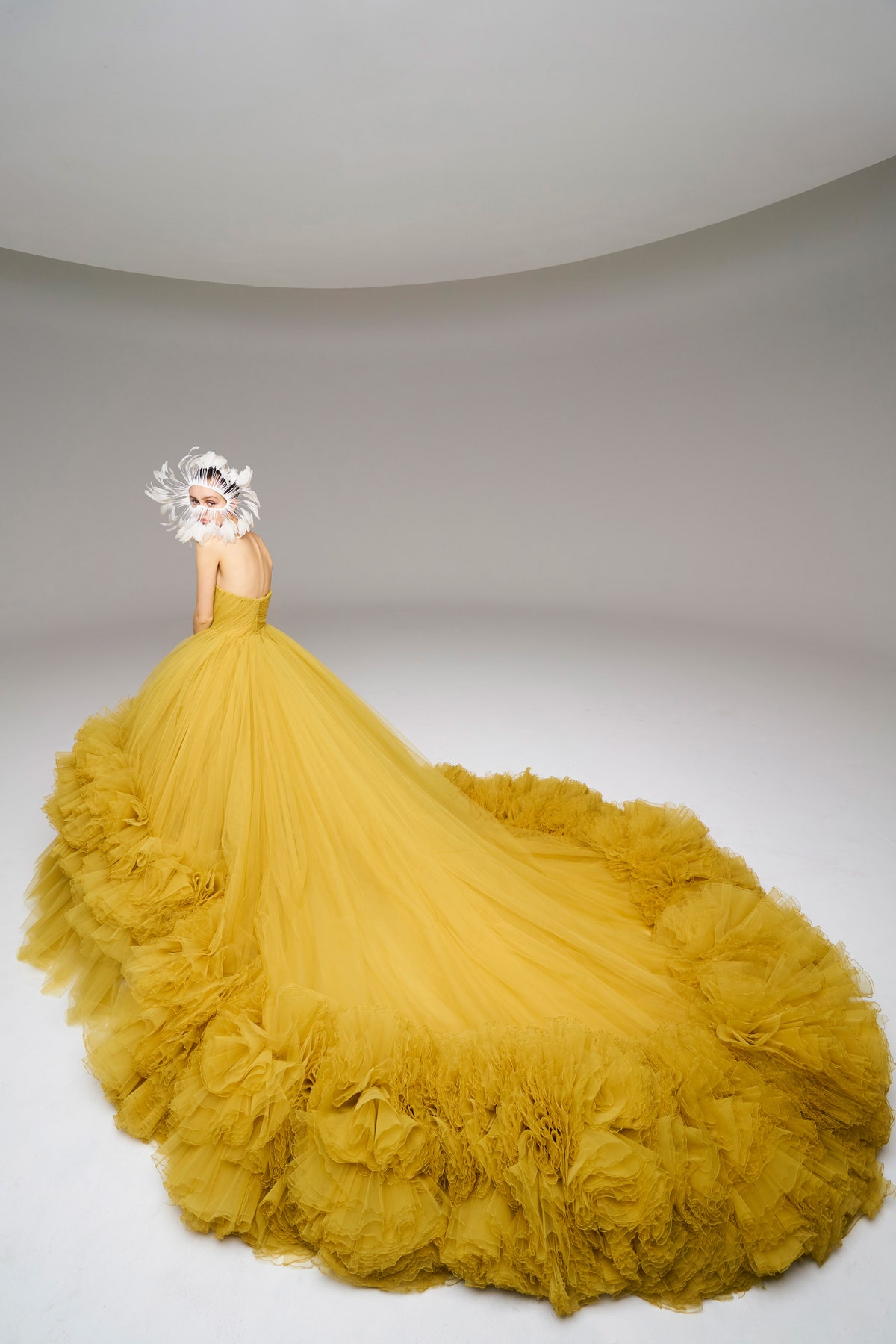 While we may not be putting on our party frocks anytime soon, that doesn’t stop me from drooling over this incredible dress from Giambattista Valli. I promise you right here, right now, when this pandemic lifts I am totally buying a ballgown! I am going to wear it somewhere fabulous, knowing I look fabulous and feeling really fabulous! If there is one couture house that can consistently make poofy dresses look undeniably chic and fabulous, it’s Giambattista Valli. Not only does he create beautiful clothing, but each is also a piece of art, handcrafted in the haute-couture standard. I think any of his creations will do for my post-Covid debut, don’t you?

THE ATTENTION TO DETAIL IS UNLIKE ANYTHINGImages Courtesy of Giambattista Valli

Valli was influenced by his surroundings, his Roman roots, and the watercolors of Yves Saint Laurent to pursue his dream of fashion. After getting his BA in art, he enrolled in fashion school in 1986 Rome where he was born and raised. The next year, he began at Central St. Martin’s School of Arts taking a course in Illustration. After, he returned to Italy where he began working in the studio of Roberto Capucci. There he was introduced to the glamour, drama, and bursting colors of haute-couture. For the next ten years, Valli would jump from label to label, working his way from assistant to Creative Designer. He continued to garner inspiration from his surroundings — from the women of cafe society to the haute couture houses to the ready-to-wear world of young hip Roman cliente.

LAYERS UPON LAYERS OF LUXURIOUS TULLE

Finally, in 2005, he launched his eponymous label utilizing both his knowledge and experience in the haute couture and ready-to-wear world. His first show in March 2005 and thus Giambattista Valli was born. They opened headquarters in a historic building in  Paris where the 150 square meter space is the first-ever boutique dedicated entirely to Giambattista Valli ready-to-wear collections, furs, and accessories.

EACH FEATHER DETAIL IS ATTACHED DELICATELY BY HAND

Nearly six years following the founding of his ready-to-wear house, Giambattista Vallie showed its first Haute Couture collection in July 2011. With his experience and love for couture, this natural extension of his brand presents a modern concept of luxury and femininity. He is accepted as an Official Member of Chambre Syndicale de la Haute Couture.

GIAMBATTISTA WORKS WITH TULLE IN A UNIQUE AND INSPIRING FASHION

His haute couture lines are all constructed by hand from start to finish. They are made from high-quality, unique, and expensive fabrics all sewn with extreme attention to detail. Each step of the process is done by the most experienced and capable seamstresses, often using time-consuming, hand-executed techniques.

GIAMBATTISTA VALLI CONTINUES TO PUSH THE LIMIT ON FABRICS AND SILHOUETTES

It feels so good to appreciate the handmade! While more and more people reach for clothing from the fast fashion industry, it’s nice to take a step back and recognize the beauty and standard of haute couture. And while I may not own any Giambattista Valli dresses anytime soon, I’ll never get over admiring and treasuring a handmade process — especially one as beautiful as this.