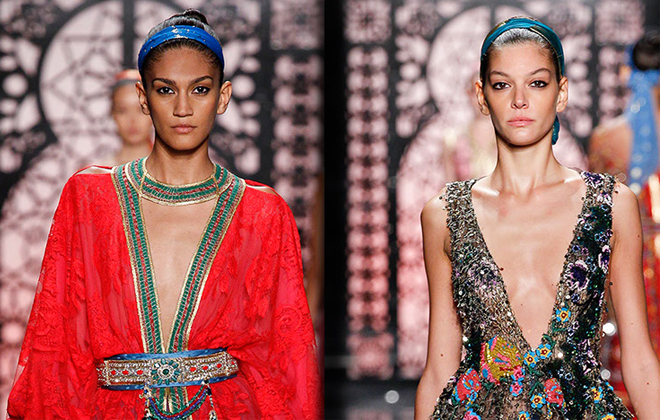 Most people know her for her elegant bridal collection, but I became obsessed with Reem Acra for her markedly unique and amazing embroidery. Practically every piece she makes is covered in the most intricate beading and needle work, bringing together ancient craft with sleek contemporary silhouettes. To me, she’s the perfect mix of insane over-the-top detail, and timelessly chic elegance.

And I’m not the only one to gush about Reem. In fact, she was first noticed back in her university days in Beirut when a fashion editor admired the dress she was wearing. As it turned out, Reem had made that dress out of an old table cloth from her mother, with the embroidery skills passed down by her grandmother. She was offered her first show after that.

Soon after Reem left her native Lebenon to follow her passion, which lead her to studying at New York’s Fashion Institute of Technology, and École Supérieure des Arts et Techniques de la Mode in Paris, before finally settling back in New York in 1986, where she began working for other lines, and even doing some interior design. It wasn’t until 1997 that she got her first real break, which came in the form of a friendly wager. As fashion-lore has it, Reem had a high-society friend who’d recently met a very fine suitor. Reem told her that she just had to marry this man, and she agreed, with the stipulation that Reem would have to make her wedding dress.

The wedding did take place in the fabulous Hôtel de Crillon in Paris, but Reem only had about three weeks to finish the intricately crafted and beaded gown that she has now become known for. In a true fairy tale ending, the dress was finished, photographed, and received rave reception, paving the way for Reem to launch her eponymous line, Reem Acra NY.

It didn’t take long for others to catch on! Soon after the launch of her bridal line, she was making gowns for society weddings and red carpets alike. And in 2001, she expanded her line from gowns to read-to-wear, bringing the same ornate, beautiful detail to fresh, fun designs.

After almost 20 years in the luxury bridal market, Reem Acra has still managed to stay on top, always evolving and creating new, interesting gowns, yet maintaining her level of top notch quality and craftsmanship. All of her dresses are designed and manufactured right here in New York, most of them in factories she helped establish, and has been working with for years. I couldn’t be more impressed with that fact. Something that a lot of companies have struggled to do. Here are a few new life goals for me: 1) Manage to do a behind-the-scenes tour for Interior Monologue with Reem herself. And 2) own a Reem Acra dress, or at least wear one of her creations one time to something special!

As a women in charge she’s managed to build her brand while maintaining all of her ideals, which balance design and craft with a keen eye for the market. I find her remarkable and a real role model. Bravo, Reem!