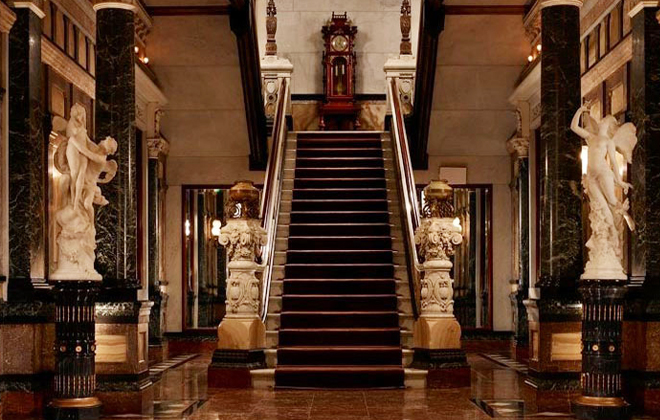 Sweet home, Chicago. I am sure most of you know that during the late 19th century, Chicago truly was at the height of its gilded age of architecture and design, which is why I’m absolutely in love with The Driehaus Museum. The restored 19th century residential house has all of style and glamour of a fabulous era that I wish we all could return to once in a while. Well, now I think we can in some ways!

Originally home to banker Samuel Mayo Nickerson, the building sits just steps away from Chicago’s Museum Mile. The mansion was originally commissioned in 1879 to Burling & Whitestone, one of the city’s premier architects who also designed the First National Bank of Chicago. The Nickerson family lived there for some time, but by the 1960s, the last family member moved away and the building was used for some time by the American College of Surgeons. Towards the end of the 20th century, the main decorative elements had fallen somewhat into disrepair.

After receiving a landmark status, the property was bought by philanthropist Richard H. Driehaus, who hoped that by preserving the past, we can influence the future of style and architecture. The museum was founded in 2003, but before opening its doors, the property underwent an extensive five year restoration, consulting over 40 specialists from the Chicago area on marble cleaning, stonework, stained glass, among many other details.

The restoration included laser cleaning of the exterior marble and stone work, which had become dark from years of coal smoke and other contaminants. They also carefully repaired almost all of the original stained glass and painted ceiling panels. One of the major points of restoration was of the Lincrusta-Walton wall coverings, which were embossed and hand-painted with oil paints to emulate Spanish embossed leather.

The decoration and styling was also extremely important, so that museum-goers truly got the sense of what this magnificent era was all about. Driehaus added some pieces from his own extensive antique collection, but was also able to keep and restore some of the original Nickerson furnishings as well, making the interiors as authentic to the period as possible.

Taking a tour through this museum truly is like stepping back in time! It makes me want to fetch my dinner gloves and cocktail jewelry and relive this magical era. There is just so much inspiration to be had from these finely textured details, textiles, and ornamentation. You can see how much time was spent and attention paid to every rich detail of these magnificent pieces and I am sure that it would be worth a visit to this off-the-beaten path museum in this grand ‘ole city I still consider “home”!