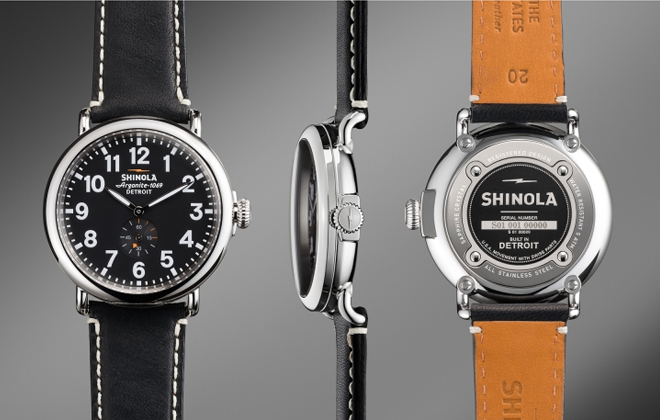 My apologies for the title of this post but I just couldn’t resist. You see, the title refers to an American brand of wax based shoe polish called Shinola that was available from 1907 until 1960. Shinola was immortalized in colloquial English by the phrase “You don’t know shit from Shinola” which first became widely popular during World War II. This phrase came from the fact that the texture of their shoe polish was quite similar in appearance to that of poop. So why am I talking about a shoe polish company that is no longer? I will explain.

Shinola/Detroit LLC purchased the Shinola name from the defunct shoe polish company, and is now a manufacturer of watches, bicycles, leather goods, and journals in Detroit.

You might have figured out by now that I love the idea of passing things down to the next generation. It proves to be a hard thing to do these days, especially if your budget isn’t endless. Guessing that one of the least likely objects one would pass down is an American made watch. And from Detroit of all places! But that is precisely what I am suggesting. I would like to introduce you to the “new” Shinola.

I found out about Shinola after seeing an advertisement for their gorgeous watches so I wanted to show you their watches first. Eventually, I plan to take you through just about everything about them as well as the relationships they have made with some of America’s best manufacturers.

It is best stated by the founders of Shinola themselves: ” We believe that people are as passionate about the quality of a product as they are about the craftspeople who hand-build each item, one at a time. This is the redefinition of luxury—a sensible realization that a brand name is worth nothing beyond the quality of the product it’s printed on, and a deep-seated belief that products should be built to last a lifetime, and they should be built right here in America.”

Perhaps Shinola is right in saying that in 60 years or so, a grandfather or grandmother will finally be able to pass down an American wristwatch. Find your family heirloom here.