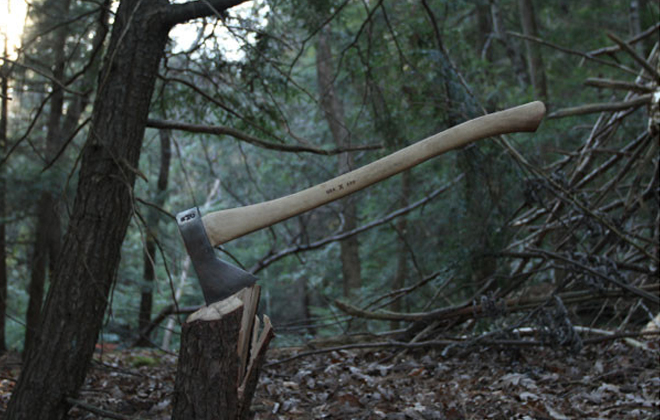 If I was in the market for an axe, I would buy this one. With all the style movements going on around “lumberjack chic” (as I call it), I am not surprised that someone has started a company making handcrafted axes in the traditional way. What better way to chop your own firewood or tap into that tree for some of your own homemade maple syrup?

Best Made Company makes a really gorgeous axe. Founded by Peter Buchanan-Smith in 2009 when he saw a need for a better axe, which happens to be the oldest and most invaluable tool known to mankind. Peter wanted an axe that could not only function as a lifeline in the wilderness, but in your home it could be a magnificent window into that wilderness to inspire people to reconnect with hands, craft, and nature.

Best Made partnered with one of America’s oldest and most esteemed axe makers. Together they launched The Best Made American Felling Axe which they describe as being made for the discriminating consumer, priced and fabricated to compete with the best.

I think that it’s the attention to detail that they incorporate into their axe designs that is the most notable feature. Isn’t the leather blade guard fantastic? And the hand-painted details on the handles? Gorgeous. And like the company, Shinola, previously featured on Interior Monologue, Best Made Company makes more than just axes. They also have a storefront in Tribeca just like Shinola.

Kinda makes me want to go and chop some wood.

This is NYC. My home. A surprise can await you aro

Our city bedroom. Looking forward to getting back

How about treating yourself to something as Summer

My stairway to heaven! After a massive gut renovat

I am so happy! This cookbook! This arrived as a su

Home is where the heart is. Now more than ever. Th

* BACK IN STOCK! * Limited quantities! * Anyone e

Welcome to Interior Monologue! Sign up now and receive 20% off your first purchase with us.