Cayce Zavaglia is a revolution 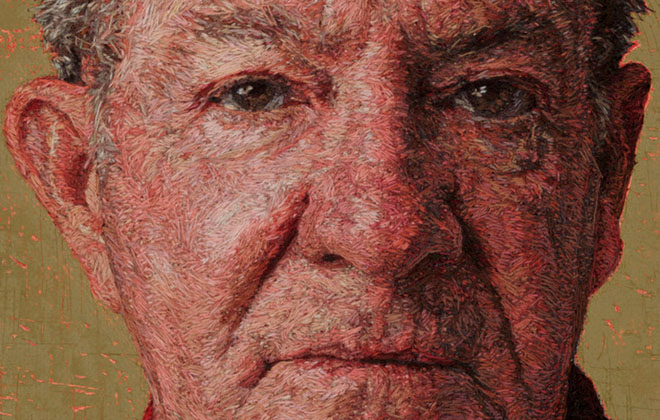 What do you think you are looking at?  I ask because I think it might surprise you. It is a detail of a painting that is actually not a painting at all. In fact, you are looking at something that was created using a needle and thread in a sort of revolutionary embroidery style by the artist, Cayce Zavaglia. It stuns me that this is handsewn by a woman who creates these images stitch-by-stitch, and how much it looks like a painting.

This incredible embroidery style created by Zavaglia doesn’t follow standard sewing rules, instead she layers stitches every which way she likes. You can see this best in some of the detail images I have included. Because of her unique approach, Zavaglia is carving her own niche in the art world with her photo-realist “paintings” in a medium that is quite rarely seen.

When she first began her artistic career, she was a traditional painter but when she was pregnant with her first child she began to look for an alternative to paint and turpentine. She kept thinking about her mother’s and her grandmother’s handcraft of embroidery that they did back in her native Australia when she was a child. She soon became hooked on the idea of creating pieces out of needlework.

Cayce was largely undiscovered until 2008, when the New York gallery, Lyons Wier, took a handful of her embroidered portraits to the PULSE art fair. They were sold out within two hours!

I was fascinated by her process and I want to share that with you. She has always approached her work by considering the process and how the piece is constructed. Zavaglia begins each piece by taking photographs of her subject against a plain background. She then selects the image, transfers it to fabric, and draws over it with an intense attention to detail. She draws every line, hair, and wrinkle and then begins to sew. Starting with the hair, she works her way down the face.

Zavaglia layers stitch on top of stitch to achieve the desired color and subtle tone. A large work consists of approximately 100 colors of wool, takes upwards of six months to complete, and is comprised of thousands of stitches.

I am not sure if I will have a chance in the near future to see her work in person, but really hope that I can sometime soon. I wonder how many people first see her work as a painting and then realize upon moving in closer that it was meticulously constructed from thread, and not a painting at all. It must be so very captivating! I am really in awe and I think you will be, too. I look forward to following the career of this talented woman.