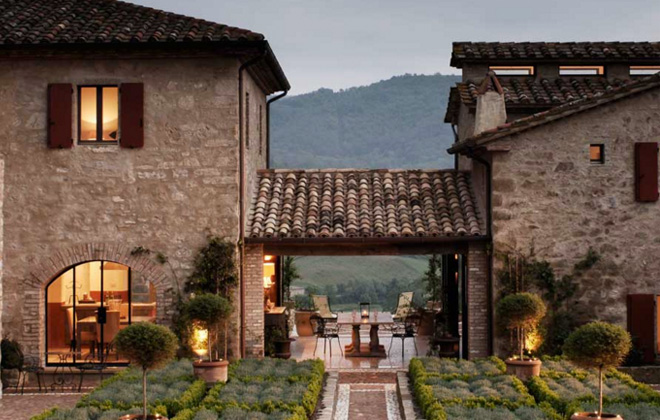 Nestled in the rolling hills of the history Umbria region in Italy, Castello di Reschio is one of those places that just seems too good to be true. That’s why I just had to see it. I was lucky enough to do so on my vacation to this magical region this past July and I am sure to find myself dreaming of a return visit in the near future. Everything about Umbria is magical!

The recently restored estate has a long history, with structures dating back to the 14th century. It served as a fort, a farm, and a countryside retreat for Italy’s finest, until the late 20th century when it fell into disrepair. The estate was then bought in 1994 by Count Antonio Bolza and his family, who began a decade long restoration and renovation of the land and the structures, which include the main house, guest houses, a large tobacco barn, along with vineyards, orchards, and stables for their thoroughbred horses!

But what drew me to Reschio is its amazing art and design program. The estate is now run mostly by Anotnio’s son, Benedikt Bolza, who is also a London-trained, award winning architect, and implemented a design workshop, and an artist exhibition space on the grounds in order to revive the centuries old artisan tradition of the region.

The Tabaccia, which is a beautiful 1940s tobacco processing center was restored as the Creative Center in 2014. Benedikt restored the building, keeping its utilitarian style, while updating it with essential modern workspace. It now functions an exhibition space for art works and artisan made goods from the region and around the world, with proceeds going to non-profits around the region.

But what’s so amazing is that all of this exciting craft-based work is happening in one of the most astonishingly beautiful places in the world! The vistas are just out of this world. And it’s amazing to see how artfully the Bolza family has maintained the traditionally style and craft of the region, while also updating the interiors to comfortable modern finishes. It truly is a feat to be marveled and one that I cannot wait to revisit!***

***So there you go. I am already dreaming about revisiting now that I wrote this article. Guess that didn’t take long.