In the Bindery with Paul Vogel 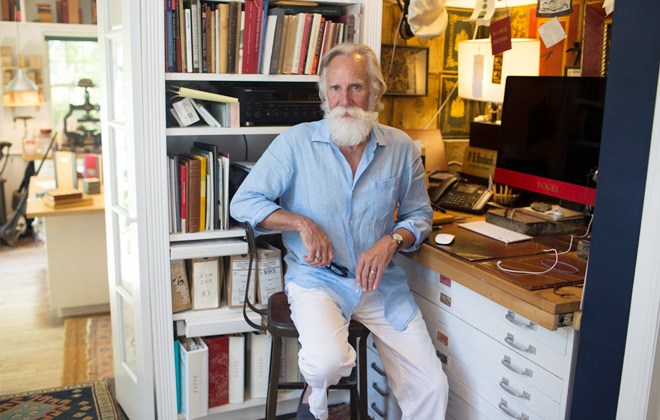 Paul in his East Hampton Studio. All photos shot by Christopher Golden for Interior Monologue.

There are moments in my life where things come into focus, and I really remember why I love doing what I am doing these days. Visiting master bookbinder Paul Vogel in his East Hampton bindery was definitely one of those moments.

I first heard about Paul through his work with the Assouline, and his bindery in the flagship Plaza Hotel store. Every time I go to the Assouline I am just in awe at the spools of colorful paper and leather, the intricacy of the tools, and the stunning hand bound volumes. Bookbinding truly is an exquisite art, but there are fewer and fewer masters working at it these days.

So, in my quest to always find the best of the best when it comes to age-old techniques and craftsmanship, I just had to follow up on Mr. Vogel himself, and find out what he’s all about.

I met Paul at his sunny East Hampton studio on a Monday afternoon, where he, his lovely wife Abigail, and their sweet dogs welcomed me with open arms. It took some time for me to pick my jaw up off the floor after seeing the gorgeous studio with its plethora of tools, materials, and samples all neatly organized in the sunny space. On one whole wall were those same gorgeously colorful spools of parchments and leather, and shelves upon shelves of stamps and tools for branding the leather—not to mention all of the perfectly crafted tools for folding, sewing, and binding the pages to create these beautiful volumes.

Paul was kind enough to lead me through the process of creating each hand-bound volume, which utilizes techniques and materials that have been virtually unchanged for over 300 years. It’s a highly intricate process, involving over forty steps to go from the uncut cotton rag paper, to a fully bound, embossed leather covered book.

Having studied Book Design at Pratt Institute, Paul was well versed in the design elements of the craft, however as he says, “it was more page layout,” than learning binding techniques. There was one assignment that involved a trip to the Columbia Rare Books Library where they asked the students to “make a simple book, but to hand bind it from beginning to end—folding, cutting, sewing the sheets, with a cloth cover.” Having greatly enjoyed this process, Paul continued to pursue this aspect of the field.

After finishing school, and going on to travel for six years, Paul found himself in Britain, where there is a flourishing book binding trade. This inspired him to make a go of being a bookbinder once he returned to the States. It was not an easy start, but having worked with several different binderies around New York—“some were very mechanized, where they did work, others were more traditional old school, some were loosey-goosey artists who just wanted to take whatever materials” – he was able to bring together his own process from his eclectic experience, one that drew on the traditional elements of some, and the value of innovation from others. Then, slowly but surly, and after hundreds of cold calls from his legal pad list of prospective clients (because, “you couldn’t just send out a mass email then!”) Paul Vogel began to build a name for himself.

What’s so wonderful about Paul though, is not just his attention to detail and his incredible technique, but the fact that he is such a warm and pleasant person. He moved his bindery out to his home in East Hampton about twenty years ago so that he could focus on his family and also forge more personal relationships with his clients, and you can tell that when starting a project with him, you are really embarking on a journey.

Five years ago he opened the outpost at the Assouline, which has been great for his business because, as he says, it gives him some “gravitas,” (which I find hard to believe, because anyone taking one look at these masterpieces would know Paul is the real deal.) During our visit, Paul recalls how the Assouline partnership came about, “I went over to do a simple job with Prosper and Martine, [the husband and wife duo behind the prestigious publishing house], and I happened to have a lot of my samples with me, so he said, ‘ah, what do you have there,’ [Paul says in his delightful imitation of a French accent] and I put them on the table and you could see his eyes lit up, the wheels turning. He said ‘we should have this at the Plaza Hotel, we should set up a bindery there, it would look so good!’ We were thinking, fine books, fine binding—together! And five minutes later, it was a done deal. He just said, ‘it should be in the Plaza…’ and that was it!”

Stepping into Paul’s bindery, be it at the Assouline, or his own East Hampton home, is truly a remarkable experience. It gives me such joy to see these age-old crafts being preserved by such a marvelous craftsmen. Now I just have to figure out what my first bound volume will be…