Bellerby & Co: The Last of the Great Globe Makers 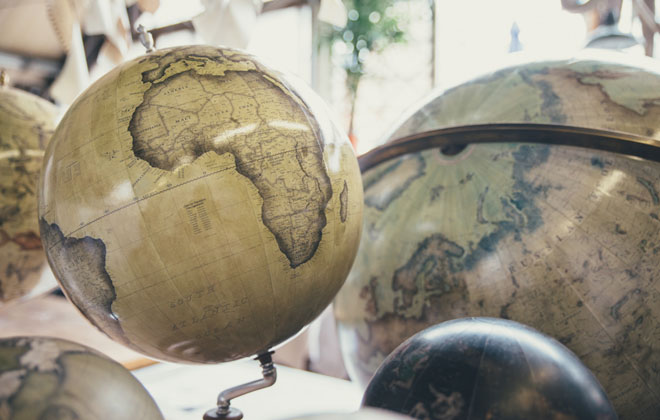 Let’s take a spin around the world. We don’t even have to get up from our chairs. I’ve written about Bellerby & Co. Globe Makers before but I just had to come back to them to spend a bit more time on the absolutely remarkable story and process behind these marvelous hand-made pieces. You might recognize their Albion Desk Globe since it made it onto my Holiday Wish List this year. Sadly, it didn’t end up under my tree as a present from Santa but I remain hopeful it will arrive one year.

A bit about Bellerby. Peter Bellerby began his journey making globes after a search to buy one for his father’s 80th birthday turned out to be fruitless. Not satisfied with any of the options available on the market, he set out to learn how one goes about making a globe, and thus the journey began. What he thought would be a fun, 2-3 month project to make just 2-3 globes, turned into a deep exploration of globe making in all of its complicated parts, including creating a perfect sphere, having a beautifully designed but up-to-date map, aligning said map on the perfectly sculpted sphere without overlapping any pieces (or mistakenly covering any countries), and creating a stylish, yet functional base that looks beautiful sitting on a desk, but also stands up to the test of spinning to allow maximum inspection of the finished globe. Eight years and thousands of finished globes later, Bellerby & Co. Globe Makers has become the go-to for expertly crafted, contemporary globes.

The production, which started in Bellerby’s dining room in London, has since moved into a full-scale work shop where his highly trained team creates every aspect of the globe in house. This strong adherence to the in-house production of almost every aspect of the company from the product to the business, keeps everything within the oversight of the small but committed team and ensures that attention is paid to every single detail.

The spheres are carefully cast out of plaster molds. The cartography is designed in Adobe Illustrator and printed in-house, and the printed map is then hand painted, making each globe one of a kind. The maps must be cut into gores, which are the triangulated shapes that fit the curvature of the sphere, and aligned perfectly on the curved surface of the globe. The finished globe is then set on a wooden or metal base that is designed for the different functions of each specialty globe, before being delivered to an ever growing list of impressive clientele. The globes have appeared in films, been commissioned for art installations, and shown in London’s Royal Geography Society. That is to say, these are not the poorly crafted, mass-produced globes of your elementary school, the ones that misspelled names and wiped out entire countries or bodies of water with mislaid maps!

Being one of only two handcrafted globe makers operating today and using contemporary cartography, Bellerby is very aware of the market for these specialty items. The globes start at £999, but he insists that they are priced as such because they are “not a throw away item,” they are built to last a 100 years, and he hopes that his customers will treat them as heirlooms, passing down this increasingly rare but incredibly useful object for generations to come. What a beautiful idea!