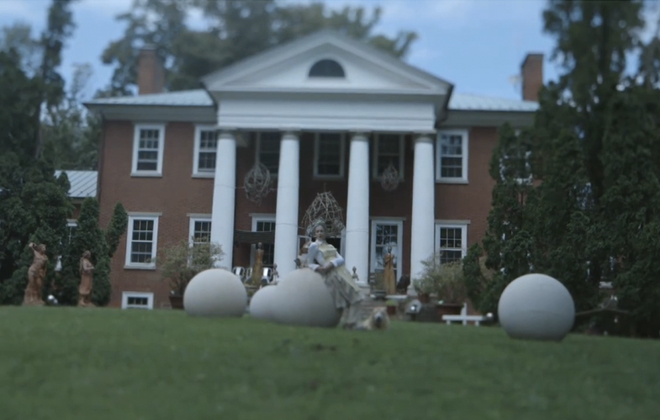 Imagine swinging a pendulum over a map to decide where you will live. That is exactly what this artist, writer, theater producer, designer and actress did when she found the country house where she would spend her time when not in NYC. The stunning property is called Estouteville. It is the 19th century Edwardian home of Beatrix Ost and her husband, Ludwig Kuttner, who discovered the idyllic estate in 1982, when Beatrix swung a pendulum over a map of the East Coast which led her to Albemarle County. Before they acquired Estouteville, the couple had spent their time in New York City and on the Hudson River in Cold Spring, NY. When their house in Cold Spring burned down, Ost wanted to start fresh in a new place and thus swung a pendulum over a map of the Northeast of United States. It landed on Abermarle county in Virginia.

The couple took an exploratory trip there and discovered Estouteville, which sat on the spot where the pendulum had pointed. The two approached the owner about buying it. He was generally agreeable with the idea, but asked they wait until after the death of his wife who was ill at the time. After she passed away and the sale went through, Beatrix and Ludwig went about restoring the house. What a great story of how they ended up at Estouteville.

Estouteville’s grand scale, flawless proportions and superior workmanship rank it as one of Virginia’s architectural gems. Beatrix and Ludwig have filled Estouteville with their considerable collection of mostly early 20th century antiques and decorative arts. Their front lawn has a magnificent display of statues and sculptures.

Thus, I hope to visit Estouteville one day to meet this inspirational couple as well as to see their beautifully restored home. Perhaps one day I will be invited to feature their house more thoroughly for Interior Monologue. In the meantime, the reason I fell in love with their home and way of living was because of a video called No Sour Meadows on www.nowness.com, directed by Columbine Goldsmith. Please watch the lovely video here.  Another visual treat for you is the clothing that they used to style Beatrix and Ludwig in the video which is provided by the brilliant designer, Thom Browne. He, too, is quite magical but more on him at another time.