Awestruck at the Alhambra 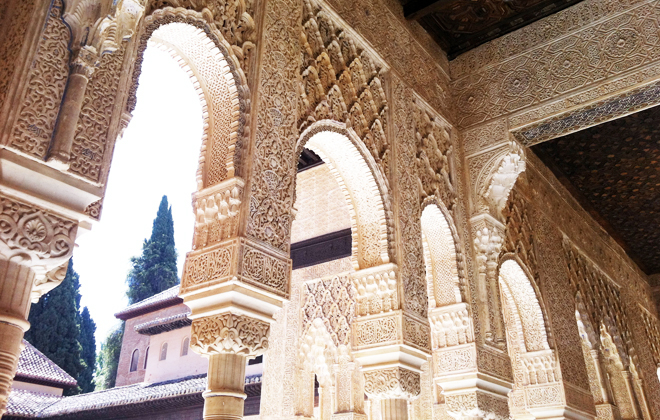 There is something so magical about visiting the Alhambra castle in Spain – it’s almost like taking a stroll back through history. It was a dream of mine to visit here and as luck would have it, I made it happen in 2015! That’s one item off my bucket list. This journey with my family was all I hoped it would be. In fact, the famed castle exceeded my expectations for many reasons but largely because of the blend of so many different, beautiful architectural details from across the centuries. This historic castle in the city of Grenada dates back to the 9th century BCE, getting it’s name from the Arabic word al-hamra meaning “red castle,” and the reason it it so rich in history is that over the hundreds of years its walls have stood, many different generations, religions, and monarchs have added on to the compound, making it a standing testament to the centuries of history that have taken place within its walls.

The earliest history known of the great Red Castle dates back to the 9th century, during the Caliphate of Cordoba when it was thought to be a fortress because of its strategic placement atop a hill that looked over the valley of the Darro river, although the walls of this original structure are no longer standing, by the 11th century, the Zirid Dynasty began building the majority of the Alcazaba, or fortress. Then in the 13th century, with the arrival of the Nasrid Dynasty, the compound expanded from a fortress into a decorated Royal residency, ushering in the golden age of the Red Castle. At its peak, Alhambra was a citadel unto itself, holding mosques, schools, markets, and plenty of housing quarters for all classes of people.

This historic site holds some of the most cherished and prime examples of Nasrid architecture and design, from the intricately hand carved plaster walls, to the ornate decorative tiles. In its heyday, the finely carved walls were thought to have been painting in bright colors to define these mind-bogglingly gorgeous details even further! Many of the designs have inscriptions worked into the ornamental design. Some pay homage to the kings who commissioned the works, some are poems, while others take passages from the Koran. The result is powerful and stunning!

The long reign of the Muslims al-Andalus eventually came to an end in 1492 when the Spanish defeated the Nasrid Dynasty, leaving Alhambra in the hands of King Ferdinand and Queen Isabella of the Catholic monarch. By the 16th century, the Palace of Carlos V was added, which is a prime example of Renaissance architecture. But by the 18th century, the palace and grounds were no longer of use to the monarch, and were ultimately abandoned, leaving this historic site to fall to ruin.

It wasn’t until the 19th century that restoration began by the Spanish Government. The restoration was no easy feat however, as Granada has a rich history that crosses centuries, religions and rulers, most of whom left their mark on the castles walls. The main Islamic influences are seen in the Mexuar, the Royal or Nasrid palace, and the Alcazaba (fortress), while Christian influence is in the granite Palace of Charles (Carlos) I/V, and the baroque Church of Santa María la Blanca. All of these elements had to be taken into account when bringing these marvelous details back to life. And thank goodness it did! It is such a magical thing to experience the extensive cultural and religious history of this region through the ever evolving architecture of this impressive fortress. I could have spent days in awe of the expert craftsmanship that has gone into this massive compound over the last ten centuries. It truly is a wonder! If you have a chance in your lifetime to visit, please do!