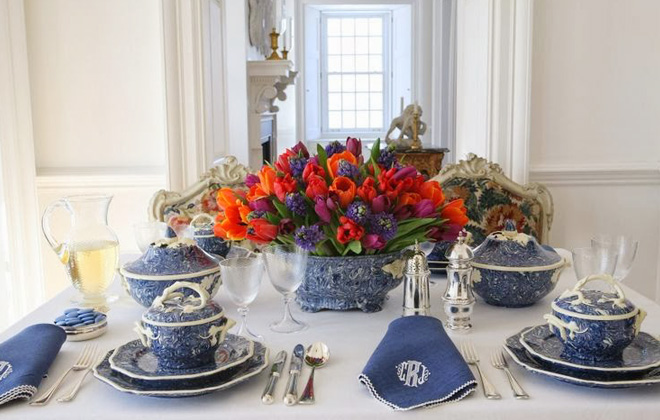 Isn’t this just the most gorgeous bunch of swirly loveliness? Sometime ago I came across a beautiful marbled vase that looked as if it had been crafted from perfectly swirled bits of colorful clay. I feel deeply in love. How could I not? Had to know more about it immediately, so after some extensive digging, I found that the technique belongs to the famed artisans of a small town in Provence called Apt, where for generations ateliers have been crafting these amazing ceramics.

Named for the region it originated in back in the mid-18th century, the process is a type of faience, similar to Pinchon and Agatware. The marbleized finish actually comes from an array of different colored clays that are all carefully mixed together to achieve the perfect swirl, never letting the colors get muddied or too well blended. Different families and ateliers are all very secretive about their specific recipes for mixing their Aptware, as it is a very difficult balance to achieve. Looks like it would be, doesn’t it?

Although this particular faience style made its way to the Province region around the mid-18th century, the marbleized effects date back to the Tang Dynasty in China. Having a particularly diverse terrain in the Apt region, with many different colors of clay to source, the pottery style took off, making the region famous for its craft. The early work was even sought after by Louis XV and Louis the XVI, which encouraged the fine artisans to begin adding embellishments and decorations to their beautiful style.

But they always ensured the quality of the structure and clay first and foremost. The trick to telling real Aptware is that you’ll be able to see the marble effect inside and out, which means that the clay is thoroughly mixed, and not just surface decoration. You learn something new everyday! Now I know what to look for when I go to stock my shelves with some of this gorgeousness.

Because of the secretive nature of the “recipes,” Aptware is not easy to come by! Many people have to scour antique shops around the Province region to find these fabulous table settings. Although there are still some purveyors of the craft in France. A shop called La Tuile a Loup in Paris has a fine selection of many artisan made ceramics, Aptware included.

And in Apt, you can find the Christine Jouval Workshop Faïence en Lubéron, which has become one of the leading aptware makers in the region. Jouval is committed to the techniques perfected by the Bernard / Faucon family, who had been working in Apt for over eight generations! In face, Jean Faucon was responsible for revitalizing the amazing craft in the 21st century. Jouval now combines the skills of the Atelier Faucon with the other regional makers, producing lovely pieces that are as timeless as ever.