The Amazing Papers of Antoinette Poisson 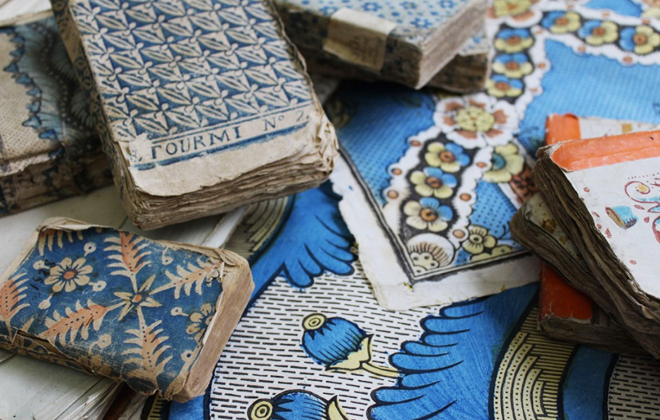 The trio of paper experts who came together to create Antoinette Poisson in Paris had a vision; to preserve the almost lost art of “domino” wallpaper, which at the height of its production in the 18th century could be seen throughout the the palaces of Louis XIV’s court in France, but nearly died out completely after the French Revolution.

Named for one of Louis XIV’s mistresses, who was known to have used the domino wallpaper throughout her quarters in the royal court, Antoinette Poisson was formed in order to bring this luxurious art form back to the contemporary interior. And it’s amazing how exacting the creators are in their recreations, using actual 18th century documents of the original “domino” papers to create new colorways and variations for the modern home.

The artisans behind the workshop, Vincent Farelly, Jean-Baptiste Martin, and Julie Stordiau, are all trained in historical conservation, which is how they originally became interested in the domino style. Because of their rigorous training and backgrounds, they are still utilizing the same techniques from the 18th century, and it’s quite the process! One that required finding the perfect manufacturer to recreate the correct size rag paper, as well as someone to produce the intricate block prints used to make the patterns.

All of the designs are created by hand from original 18th century documents and salvaged patterns. Those patterns are then engraved into a block print, which serves as a sort of stencil for the design. After each individual paper is block printed, the artists then go in and fill in the colors by hand, which always leaves room for imperfections that make each one slightly unique. And the result is the 35 x 45 cm paper, or “domino” tile, in classic color ways, as well as updated modern palettes. And what’s even more amazing is that this all takes place in their Parisian studio!

Yes, but here is the kicker – they have to do this to create every single piece of paper! Each one is like a piece of art on its own. But keeping to the original technique, the domino blocks are individually applied to walls in a repeat pattern, to create the wallpaper we see in it’s final form. Their process can also be done on linen and velvet, for other applications like lamp shades, pillows, and books, which Antoinette Poisson has expanded their line to include. The maximalist in me just loves anything covered in a good pattern!

The team also continues to work on restoration projects, bringing all of this wonderful history back to life. They have done projects all over France, and have become quite well known for their craft. It’s wonderful to see these young conservators taking it upon themselves to preserve this small piece of French heritage by continuing to craft these exquisite designs. I am such a fan and hope you will be now as well!