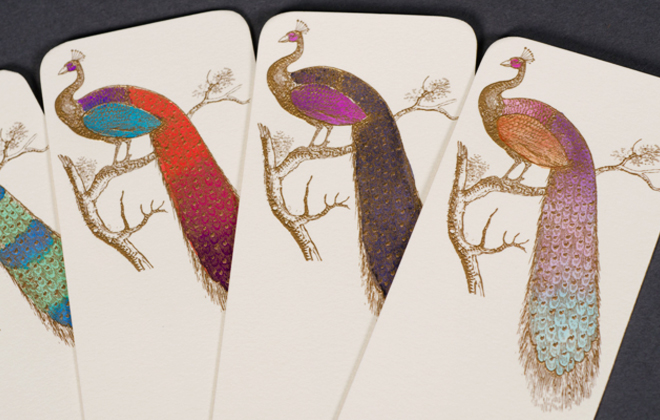 It all started with this bookmark.  A gorgeous hand painted, engraved peacock on a bookmark. I had to have it. Bernard Maisner, is the creator of my coveted bookmark. His products are all hand-lettered and engraved stationary, which is why I absolutely fell in love with the work of Mr. Maisner. Nothing says luxurious like his cards, place settings, invites, and even bookmarks. When have you last bought a bookmark, I ask? Since I tend to get addicted to thinks I love, I recently picked up another one of Maisner’s illustrated cards from Bergdorf’s, which had beautiful gold hand lettering and little red flowers, but it was so stunningly beautiful I haven’t been able to part with it yet! This love affair – it’s getting serious.

A bit about Bernard. He began his calligraphy empire by creating bespoke wedding sets for New York’s elite, but his staunch commitment to the dwindling craft of calligraphy in the wake of the digitization of the graphic design world is what makes his career so interesting. Maisner persists in his quest to keep hand-lettering alive, insistent that the art form will continue to be important to true connoisseurs, much like those who learn Latin, or collect old LPs.

Which is why he has become the contemporary authority on calligraphy. In an interview with the AIGA, Maisner spoke passionately on the importance of hand-lettering versus digital fonts saying, “Hand lettering is alive and vital because the shape of every single letter is affected, and therefore modified, by the letter before it and after it, as well as what is above and below it. Once these originally hand-lettered letters become fixed and repetitive, as a font dictates they must be, they tend to die right there on the page, right before our eyes.”

And this passion for his craft is plain to see in every detail in his work, from his bespoke stationary and wedding sets, to advertising and brand work, to his illustrated line of retail goods. Each Maisner card is individually hand painted which makes these unique creations highly labor intensive, requiring multiple engraving press runs. Maisner’s inimitable calligraphy is engraved on colossal-sized deluxe heavy-weight stock.

In addition to creating his own exclusive font, Maisner has become a master of hand lettering in a vast variety of styles, using every tool imaginable to achieve the look he is going for, from a collection of 3,000 vintage steel nibs, to recycled Elmer’s Glue bottles; he is not afraid to buck convention in order to find the perfect hand-done effect.

This willingness to let go of formalities and really explore could be due to the fact that Maisner got his start hand-lettering for his rock bands in high school, before going on to pursue a traditional calligraphy degree from the Cooper Union. With this versatile background in fine art, calligraphy and rock n’ roll, Maisner is able to freely mix fonts, create flourishes and adapt to different styles, much like an actor is able to put on accents, or speak in entirely different languages.

Maisner’s work as “defender of the written word” has certainly paid off! Not only has he been able to turn a passion for calligraphy and hand-lettering into a full fledged luxury shop, but his lettering has become highly sought after by patrons such as Martha Stewart, Oprah, and Anna Wintour. Bernard Maisner truly has become synonymous with classic, elegant New York style.

Perhaps you can send one of his “thank you” cards the next time someone does something that deserves a really special thank you? How lovely would that be?

Gah! I want this rug! I’m in search of a rug for

Happy Sunday from me and my favorite flowers. I wo

Find out why handmade is the best made.